Champions once again baby! My partner and I competed in the Season End Championship and I knew right away that it was in the bag. The pair we played against is who we played and defeated in the first half championship. My partner and I sort of shit the bed the second half of the season so are handicaps were 2 strokes different from the 1st time we had played these guys and it obviously helped but we beat these dudes asses and it really wouldn’t have played a factor if we played with our original handicaps. After totaling up the points last night we ended winning big 26-10, I took 14 points and my partner 12 points. 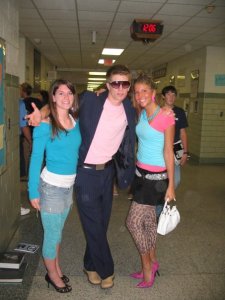 So we will now be acknowledged as the “2016 Waterville Golf League Champions”. My partner was cold blooded because he wanted this thing so bad he didn’t give any putts to our competitors and I believe missed a couple from feeling guilty about it. Nevertheless he couldn’t wipe the shit eating grin off his face. This isn’t his first championship, he won 11 years ago when he first entered the league, I was 16 at the time and looked like this.

I guess him and I have something in common now because this was my first time as full-time league member and I won a championship. All together the Waterville Golf League was a good ass time throwing back some brewskis, playing some golf, and having some laughs with some dirty joking old men. Look forward to defending the championship next year. I’ll continue to harness my craft and play with boys so until next year…