The Rick Muntz Week Long, 7 Day ab challenge came to an end with the last day being Sunday and it’s taken us a bit of time to recap the results because we have mixed emotions on the subject matter. I will say poorly timed execution when accepting the challenge because it was Super Bowl Sunday and there was no way he wasn’t joining in on the festivities. Odds were stacked against him but Rick was a man of his word and worked out daily despite last Thursday when he said he was using his “Cheat Day”. Who the fuck takes a cheat day on a 7 day ab ripper challenge?! Rick does apparently…and what did he do with that cheat day? Headed to Bdubbs for a medium sized order of HOT boneless wings, mozzarella sticks, and 2 Tall Ice Cold Bud Light drafts. What a sight to have seen with our very own eyes. Hell, on Saturday I saw him eating popcorn, buffalo chicken dip, and once again drinking Bud Lights like a mad man. Must’ve been some “bowling fuel” because he rolled like a god damn pro shortly after that. (Another one of his many hidden talents.)

I know we may have mentioned his healthier eating habits in the older posts leading up to this dismal day for our good friend Ricky. He failed the challenge, so we don’t expect him to keep the effort of infusing veggies into his diet continue much longer. Rick already has a slimmer overall body shape with a beer gut, In my mind, he should have hit the weights and ab work out a little harder than the cardio. He claims to have run everyday for 30 minutes on a 6 speed, which is actually jogging, but says he followed that up with 10 minutes of speed walking. He reported to me that he had lost 3 lbs, immediately I reached out to Ted and J-Hoe with concern that he may be taking this the wrong direction. I will say that the big ol’ rig of his may have made it more difficult to pull off some of the workouts that others grind out daily. Nevertheless, we’re extremely proud of his effort and hope that he continues to improve himself, mentally, physically, and emotionally.

This is what I assume he looked like after a day of hitting it hard… But here’s his final results that we grabbed from our Super Bowl Party that were shown on our twitter Sunday evening. 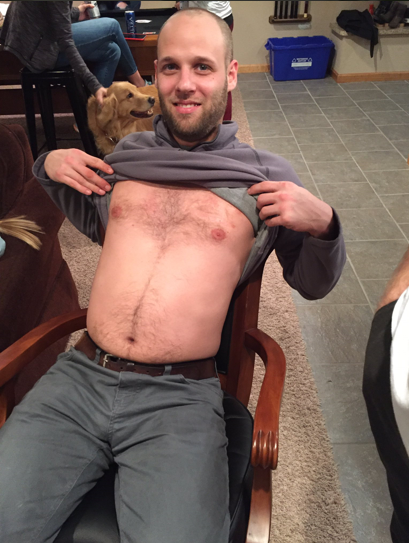 It looks as if Otto, the dog behind him, is whispering in Rick’s ear… “This shit is over bro, you’re not getting the 6 pack. Here’s the thing though, I saw some chicken wing bones in the trash… Grab them outta there and we split them, you no ab-having, has been…what do you say?!” Those were Otto’s words, not mine. While coming up just short I will reiterate, couldn’t be more proud of his efforts to clean his act up. He also cleaned up his dome by shaving his head which looks great despite one of our avid follower’s hitting him with a cheap shot. The picture doesn’t do it justice. Keep it up Rick! We love you and so does the rest of this big World. It’s at your fingertips, reach out and grab it by the balls, because you know you’ve got that Big Dick right above em!