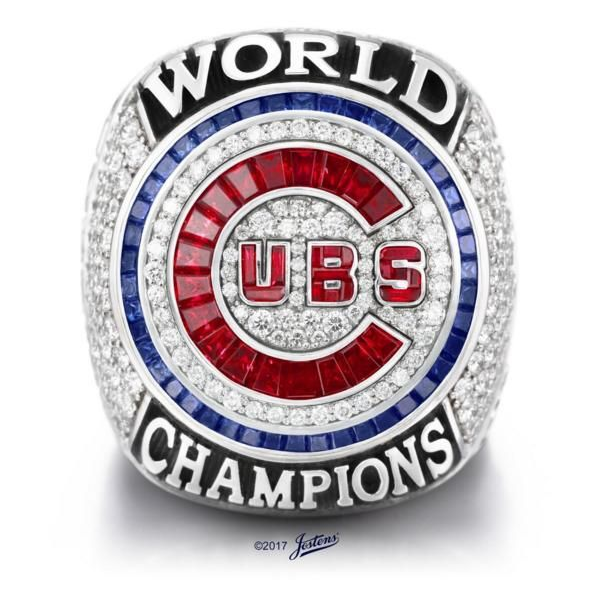 The Cubs World Series rings aren’t bad. If you’re an Indians fan look away but overall I love the simple design and the cool detail. Each ring includes 108 diamonds, which signify the 108-year drought. The also have an image of William Sianis’ infamous billy goat which was long blamed for the curse. – Also, Jostens has a damn good thing going. They make all of these things. Including High School graduation rings.

“The Chicago Cubs World Series Championship Ring, designed and produced by Jostens, is made from 14-karat white gold. Its top features the traditional Cubs bullseye logo, masterfully crafted from 33 custom-cut genuine red rubies that are surrounded by 72 round white diamonds, all within a circular perimeter made up of 46 custom-cut, genuine blue sapphires. The bezel is surrounded by 108 round white diamonds lifting the Cubs logo to victory and signifying the end of a historic 108-year championship drought. Overall, the ring contains 214 diamonds at 5.5 karats, 3 karats of genuine red rubies and 2.5 karats of genuine sapphires.

One side features the player’s name set atop the iconic W Flag, which is created from 31 round white diamonds and a fire blue corundum understone that forms the “W.” Silhouette images of Wrigley Field’s bricks and ivy surround the flag and the player’s number, which sits below the flag.

The other side features the year 2016 above the iconic Wrigley Field façade and Marquee, displaying the message “CUBS WIN!” A silhouette of the World Series Trophy sits below the Marquee with a large round white diamond set in the center, signifying the 2016 World Series victory. Two princess-cut diamonds flank the trophy, representing the team’s two previous World Series titles. Wrigley Field’s bricks complete the background.”